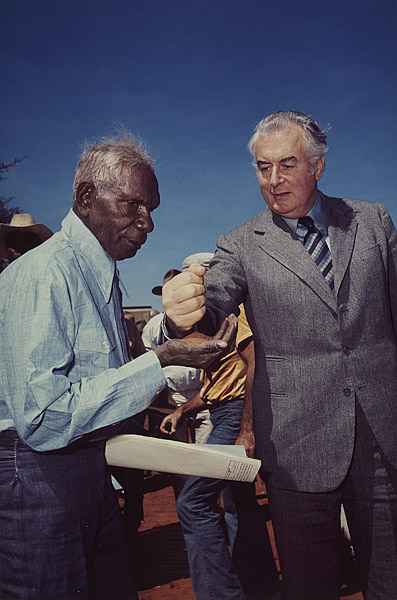 Australia’s policymakers are fond of saying that Australia ‘knows how to do development’; our law and justice interventions are less muscular, and more contextually aware than those of other major donors. Mervyn Bishop’s 1975 photograph reminds us that this is a bold claim.

Whitlam is incongruously dressed as if for winter in the capital while pouring red soil into Lingari’s hand. The crisply ironed lines of Lingari’s buttoned down shirt mark this as an important day. In the background bob wide-brimmed hats – the uniform of the famously skilled Aboriginal stockmen. Their land rights story will re-emerge in Australian cultural history as the 1991 Paul Kelly song, ‘From little things big things grow’.1

Gurindji people had worked for years as stockmen on Wave Hill station in Australia’s Northern Territory, owned by the English cattle baron Lord Vestey, which occupied their ancestral lands. They were paid in rations and worked under slave-like conditions. In 1966 they staged a labour strike, walking off the land and camping at Wattie Creek, which they renamed Daguragu. Refusing offers of wages, they instead demanded the return of their land. After 9 years of quiet campaigning, and petitioning the Governor-General and the federal (Commonwealth) government, Vestey surrendered 90 acres of land to which he held title and the Commonwealth acquired the land and passed title to the Gurindji. This first successful demand for return of Aboriginal land was followed by the Aboriginal Land Rights Act (Northern Territory) in 1976.2

It was not until Eddie Mabo – an indigenous Torres Strait Islander — brought suit in 1992, however, that the government was forced to concede that Australia had never been ‘terra nullius’– that the taking of what are now vast tracts of Commonwealth lands was in fact confiscation of land owned by indigenous peoples.3 The Mabo Case established ‘native title’ as an integral part of Australia’s property rights system, recognised in the 1993 Native Title Act (Commonwealth).  As a development donor, Australia had been funding cadastral surveys and land titling projects abroad in legally pluralist states for decades, but formally conceded its own legal pluralism a scant 20 years ago.

Recognition of native title has had disparate effects on indigenous communities in different parts of the country. Those landmark decisions have not translated into comprehensively equitable treatment of Australia’s indigenous citizens. The intervening 20 years have been rife with litigation and alarmist claims by graziers and mining companies, now forced to negotiate with local indigenous communities rather than receive quasi-automatic leases over Commonwealth land. In that same sundrenched Northern Territory, in 2007 the Commonwealth government suspended the ordinary rights of many indigenous citizens in what is known as ‘the intervention’.4 The policy rationale for this was a Territory government report detailing alcohol and drug–fuelled child abuse and domestic violence in specific communities. The (then) Liberal Commonwealth government then dispatched military personnel, seized control of indigenous community governance, suspended community owned businesses and reconfigured entitlements such as pension payments. The legal mechanism for doing this was the constitutional power of the federal (Commonwealth) government to override the laws of the Northern Territory (a proto-state that remains economically dependent on federal government funding). Elements of the intervention continue today.

As indigenous lawyers point out, a key driver here is discourse of deficit, where indigenous communities feel compelled to highlight their failures in order to attract the policy attention and funding that will ‘remedy’ community development problems. This resonates to a startling degree with the donor language of ‘lack’ that Laura Nader perceives in rule of law interventions abroad.5

And herein lies one of the fundamental paradoxes of law and development (or rule of law) as it is promoted worldwide – we engage in a declarative exercise in which we project abroad our enlightened, civilized selves as the protagonists in a utopian vision of global justice. And yet in donor countries such as Australia, the United States, Canada, Japan, China and beyond, what we claim as empowerment and local ownership for those receiving law and development assistance (or rule of law promotion), we often manifestly deny to our own indigenous citizens.

In Australia it is a continuing source of shame that, two hundred years after white settlement, in what is now one of the world’s most affluent countries, our indigenous peoples have dramatically lower levels of health, education, and life expectancy than their non-indigenous peers. Indigenous photographer Mervyn Bishop reminds us that what Aboriginal Australians have in abundance is patience, resilience and a phenomenal depth and range in artistic expression.

1 re-recorded with indigenous artist Kev Carmody in 1993 and giving the title to the National Gallery of Australia exhibition in which this photograph featured after its purchase in 1994. http://en.wikipedia.org/wiki/From_Little_Things_Big_Things_Grow

5 Laura Nader and Ugo Mattei, (2008) Plunder: When the Rule of Law is Illegal (Blackwell).

Visit Approaching the econosociolegal for critical, creative and practical design-based approaches to law.
%d bloggers like this: